Let’s start with Arsenal. 3 wins from 11 games in all competitions. Back to back defeats in Premier League games and Arsenal find themselves 6 points adrift of leaders Leicester City. For a team that should really win the Premier League this season, Arsenal are trying their damnedest to fluff their lines.

Wenger for all his past glories at Arsenal could see this season as that watershed moment where the club started to look at a future without the Frenchman at the helm.

I struggle to think for a logical reason as to why Arsenal shouldn’t win the title this year. Their squad is fit and healthy overall, with greater depth than any Arsenal squad in recent seasons. Chelsea haven’t been in the race since September, Man Utd dropped by the wayside in November, Manchester City haven’t looked convincing against any of last year’s Top 5 all season and Arsenal still haven’t the gumption to grab the nettle and run off into the sunset. But after defeats to a heavily weakened Manchester United side and relegation candidates Swansea City, Arsenal look a lot less than sturdy in their title push.

The biggest worry for Wenger will be the disappearance of any goals. Giroud, someone I admittedly earmarked as taking a little too much flak through the course of the season, has gone 10 games without a goal in all competitions. Whilst a striker can hit a poor run of form, Giroud’s dry spell has coincided with the disappearance of Theo Walcott and an Alexis Sanchez who is well below par.

Theo Walcott’s claims of being an out and out striker seem more and more out of touch with every passing game. 33 games in all competitions this season has seen Walcott return a rather disappointing 6 goals. Walcott is undoubtedly fast and is capable of moments of real class but the lack of goals and clarity in decision making seem to continually hamper any real progress Walcott makes. At 26, he still has many years of football left him but it is the same elements of his game that are lacking today as they were when he signed for Arsenal a decade ago.

For Alexis Sanchez, a player who’s work ethic makes up for the lack of Ozil like sparkle in the technique department, he looks like a player trying that little too hard to prove how good he is. Nothing seems to be coming off for the Chilean and with no league goals since October; Sanchez is having his first difficult spell in England. Against Manchester United Sanchez was arguably the worse player on the field. He wasted any possession that he didn’t lose; he ran into cul-de-sacs and dropped deeper and deeper as he sought to influence the game in a positive manner. It was a very un-Sanchez performance for a player normally so positive and direct, he seemed at a loss with his own ability in the final 30 minutes at Old Trafford. Sanchez clearly understands what it takes to perform on the biggest stage, but this is a season where you can clearly see that his Copa America excursions in the summer may be taken a toll on his body as much as his performance levels.

A couple of weeks ago, I assessed the title run in of all the current Top 4 and what struck me was how tough Tottenham’s run in could of potentially been if they remained in the mixer for the title. Tottenham’s remaining fixtures in the Premier League are incredibly tough but it mustn’t be forgotten that the FA Cup presents the chance of silverware this season as well as the Europa League (admittedly being drawn Borussia Dortmund is incredibly unlucky on Dortmund’s form this season).

Pochettino has admirably tried to thrive in every competition he has faced but you can’t help but feel he wasn’t expecting to do so well in the three remaining opportunities for silverware. Pochettino’s style of play requires a lot both mentally and physically from his players, and whilst he has been able to rotate his full backs, the importance of players such as Harry Kane, Christan Eriksson and Eric Dier has meant that it is becoming harder and harder to rotate the key personnel. For a Tottenham, who has a club has spent less day’s top of the Premier League since its inception than Leicester has this season, it might be time to strategically try and put certain eggs in certain baskets, as even a place in the Top 2 will certainly be an incredibly good season for Pochettino et al.

Both Wenger and Pochettino will know that a defeat for either side could potentially see the end of any title talk, especially in Arsenal’s case who can’t possibly afford to lose more ground on Leicester City.

North London Derbies always tended to be glorious goal fests in the ‘Arry Redknapp days, and whilst they tend to be much tighter affairs, this game will be the most cagey in a long time. BT Sport are lucky to have the game of the weekend and whilst this doesn’t have ‘cracker’ written all over it, the ramifications of this game could be massive.

Form Over The Last 6 Games 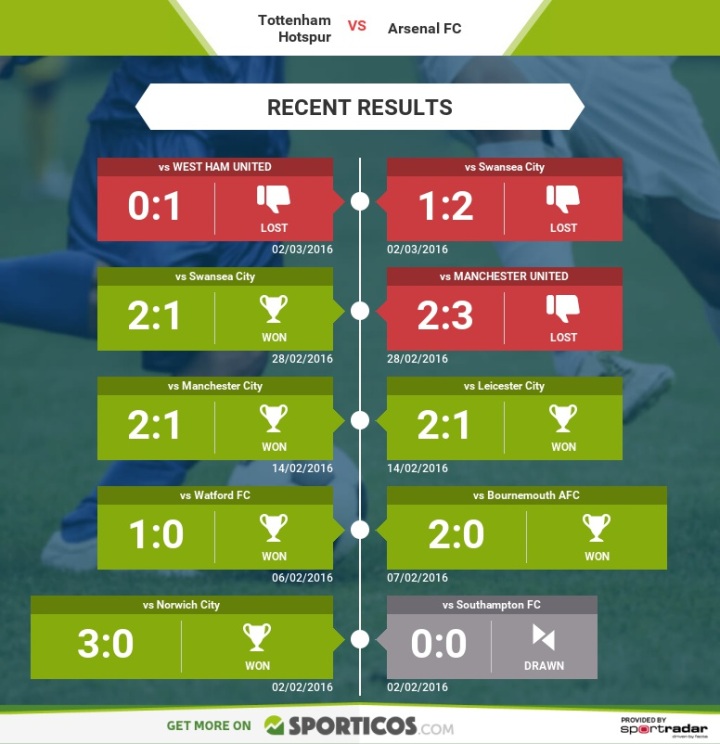 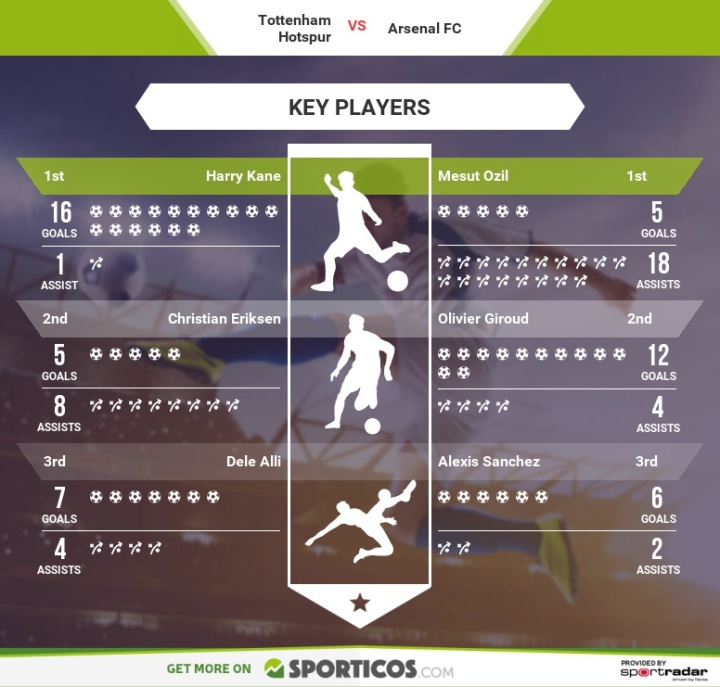 All Graphics provided by Sporticos.

What you think? Cancel reply